We can trade, hodl, buy and STAKE with in the Crypto and NFT world.  Coins that can be used for staking are also know as PoS Coins Proof of Work.  You can stake these coins and receive rewards.  Since 2019 Cosmos has been in the top 20 coins.

Cryptocurrency is a digital asset based on a network that can be used to transfer money. It is created with the help of encryption distributed on a large network of computers, known as the blockchain. It is an online ledger for recording the transactions, and each transaction needs to be verified before being recorded. The first user to verify the transactions gets rewarded with newly issued crypto. This mechanism is followed in the Bitcoin blockchain, and it is known as Proof of Work. To win the right to verify the transaction, the user has to solve a mathematical problem. 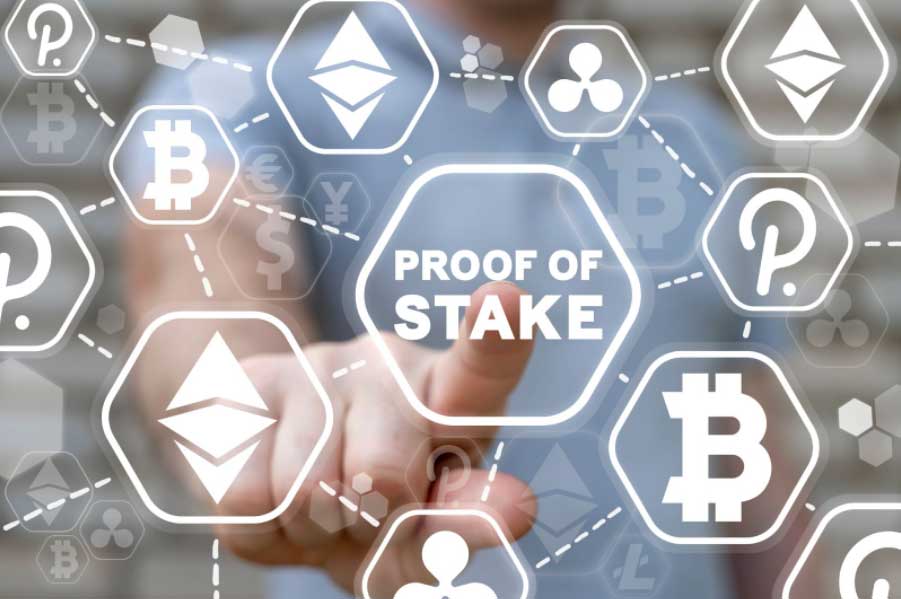 Some blockchain projects like Ethereum, Cardano, etc. use an alternative consensus algorithm in which the users have to contribute the coins held by them, to win the rights to verify the transaction on the blockchain. This contribution by the users is known as staking and this mechanism is known as Proof of Stake. It is a popular method of earning passive income in the crypto world, it consumes less energy, and is a faster method than Proof of Work. The users first have to buy the PoS Coins of the project and stake them to earn rewards. It is similar to investing your own PoS coins and earning an income on them. Staking the coins that have good market value and that are being staked by numerous participants can give the users good returns.

Below, we discuss the top 5 Proof-of-Stake coins that investors can benefit from:

Cardano is a smart contract-enabled blockchain created by Ethereum Co-founder Charles Hoskinson. Cardano was developed by academia through peer-reviewed research. The delegated Proof-of-Stake protocol is ouroboros, and the POS coin of the network is ADA. To buy ADA, you will have to register with a cryptocurrency exchange like ZebPay. This is needed also before you can start staking ADA.

Cardano is currently the 7th-largest cryptocurrency with significant investment from retail investors. The blockchain allows the stakers to earn a reward of up to 4 to 6% of APY. The high percentage of locked ADA tokens reflects a good project and positions the ADA coin as a top PoS coin for long-term investment. The current market value of ADA is $1.07 (INR 80.93) and market capitalization $34 billion

Polkadot is a blockchain project known for connecting blockchains and providing interoperability. DOT is the staking coin for Polkadot. Currently, Polkadot is the fourth-largest PoS coin by staked value in terms of U.S. dollars. The current estimated return on staking Polkadot is 14.5%, which is better than other blockchains. If you would like to buy Polkadot, you may register with a cryptocurrency exchange like Zebpay. The current market value of Polkadot is $18.95 (INR 1433.3) and the market capitalization is $20 billion

Polygon is a Proof-of-Stake sidechain built on Ethereum. The native token of the blockchain is MATIC, but other tokens must be transferred from Ethereum before staking can begin. The transfer can be done either using a Proof-of-stake bridge or a plasma bridge.

Although Polygon is not an independent blockchain, it has one of the largest DeFi ecosystems, next only to BSC, which makes it one of the best POS coins. MATIC is currently trading at a price of $1.69 (INR 127.8) with a market capitalization of $11 billion. To buy MATIC, please register with a leading cryptocurrency exchange.

Binance is the largest cryptocurrency exchange in the world and BNB is the token issued by Binance, also known as Binance Coin. Initially, it was an ERC20 token before being ported to the Binance Smart Chain (BSC), which competes directly with the Ethereum blockchain by offering a higher transaction output. The minimum staking amount for BNB coins is 0.1 BNB, which makes it suitable for anyone who wants to hold tokens and earn passive income from one of the largest cryptocurrencies in the world. You can buy Binance Coin from a leading Cryptocurrency exchange in India like ZebPay. The current price of Binance Coin is $429.7 (INR 32,515) with a total market capitalization of $71 billion.

Cosmos is a cryptocurrency that aims to power an ecosystem of blockchains designed to interoperate and scale with each other. The team of developers at Cosmos tried to create an internet of blockchains. The native token of the Cosmos blockchain is ATOM. The holders of ATOM can stake their tokens to validate transactions and maintain the network and receive more ATOM as rewards. The total supply of ATOM is restricted to 280 million.

ATOM was launched in 2019 and is one of the top 20 cryptocurrencies by market capitalization now. The current value of ATOM is $27.7 (INR 2094). If you are looking to buy ATOM, you should register with a cryptocurrency exchange like ZebPay.

Now that you know about the best PoS coins to invest in, you may want to go ahead and start staking. If so, immediately log in to ZebPay to buy your preferred PoS Coin and enjoy long-term rewards.